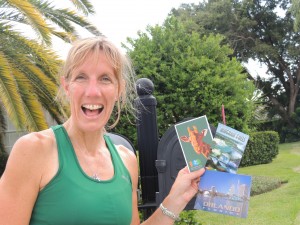 Thanks for your postcards!  To date, I have received 30 postcards!  As you can see, finding postcards in the mailbox is a highlight of my day!

Did you ever watch Postcards from Buster when you were younger?  Not surprisingly, this was one of my favorite shows to watch with my kids.  It’s a spin-off from the Arthur show and series written by Marc Brown.  In his own show, Buster travels around the world with his dad one summer and sends video postcards back to his friends in Elwood City.  The video postcards Buster sends are pretty cool, and a very modern advancement from the original postcard of 1861.  Today I learned that it is now possible to send a QR code on a postcard which will play a video when scanned on an iPad or iPhone.  I think that is something we will have to investigate when we return to school.  Postcards sure have come a long way in 153 years!

As an amateur deltiologist, a.k.a. a postcard collector, I have collected hundreds of postcards!  I have yet to receive a video postcard, but I do have lots of different printed postcards.  Some have original artwork created by the sender; others are photographs taken by the sender. I have one that is printed on a piece of wood.  Most are from the United States, but I have a few from Europe and South America.  We will check them all out when we return to school in the not too distant future.  I am planning my postcard bulletin board so you can see all the places your classmates have ventured during the last 10 weeks.